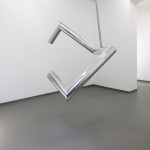 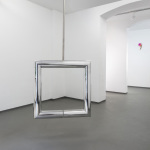 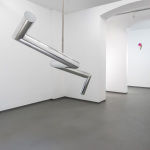 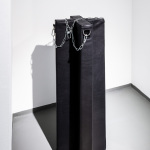 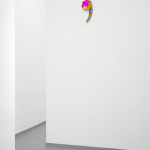 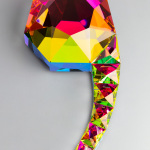 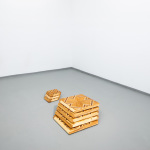 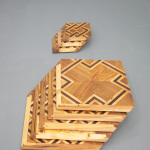 8, 9 Madonna Kneeling With Child, 2019, parquet floor from a late 19th-century villa in Berlin,

A square metal sculpture repetitively moves and collapses on the floor with tremendous sound. The four sides that compose the square embody a limited form while moving in pairs or individually. The square tries to get up, bending all of its joints. One might see human nature in the gesture of the machine: falling and getting up over and over again. Realizing the movement seems to be a metaphor of limited freedom and adaptation in human society might bring up sadness or melancholy as we see the futile actions the square continues to take, with unsuccessful results. This is Via Lewandowsky's 2013 piece Contenance (Relational Sculpture No. 5).

Unlike this earlier work A Square Meter (2019), presented in the exhibition Geometry of Obedience, repeatedly moves and stops slowly and gracefully in the air, rather than struggling on the floor. The square dances as if in slow motion, drawing geometric gestures in the air, and intensively revealing Lewandowsky's current interests in Bauhaus, order, and conformity that are explored in the exhibition.

Created in the diverse media of sculpture, object, installation, and sound, Lewandowsky's art handles the substantial themes of communication, identity issues, and the remnants of history, as well as ordinary occurrences. The artist began radical moves with subversive performances when he formed the avant-garde group Autoperforationsartisten, which opposed East German art's authority, in the mid-1980s. Lewandowsky's later works maintain the artist's early political interests but pursue metaphor, irony, and satire instead of aggressive and direct ways. The artist is also deeply interested in our relationships to symbols or language and reveals their hidden associations through the paradox of the impossibility of communication through language. He provides sharp insight into society without losing a sense of humor and humanity in his critical perspective. In this exhibition, the artist presents the relationship between form and ideology, which he has continuously explored, as a relationship between geometry and obedience. This will be read more as a poem than a direct narrative.

In order to discover the meaning of Lewandowsky's lyrical metal sculpture, one must pay attention to the artist's engagement with the form of the square. This began with the Bauhaus Movement, which celebrates its centennial in 2019. Established in 1919, just after the end of World War I, the Bauhaus made great achievements and continues to have a huge influence on art and lifestyle today despite its short lifespan of fourteen years.

Two silent films, Fritz Lang's Metropolis and Walter Ruttmann's Berlin: Symphony of a Great City (German: Berlin: Die Sinfonie der Großstadt), display the social atmosphere of the Bauhaus golden age of the 1920s. The Babylon Cinema of Berlin, which celebrates its 90th anniversary this year, has closely reproduced the way silent films from the 1920s were originally screened with live orchestra performances. This has made it possible to gain a deeper understanding of the instability in German society at this time through experiencing a more immersive representation of these films. The two films simultaneously show the melancholy of a war-defeated country and the urban dynamism begotten by machine civilization. In Metropolis, society's above-ground and underground worlds are starkly contrasted, and the metropolis is represented as a dystopian symbol full of uncertainties regarding machine civilization. This is revealed through visual aspects, such as the contrast between light and shadow and the geometric compositions, as well as the content of the film, seen in the collective movements. The city in Berlin: Symphony of a Great City is a giant spectacle in and of itself. The quickly developing black-and-white imagery and sound make the portrayal of German society's uncertainty and fear feel more realistic. The society consists of machine noises, aspirations for mechanization, geometry, and fetishization, all of which push human beings to the side. It is interesting to see that the Bauhaus's golden age coincides with the time when the films were made.

Functionalism bloomed as the Bauhaus responded to war, revolution, and the expansion of mechanical civilization. The movement reflected the demands of the era. The Bauhaus’ ideology was to produce excellent – and replicable – quality, so standardization and unitization were inevitable. The square is one of the most functional and excess-stripped, minimal units. And it represents the Bauhaus’ tendency to aim for unity and standardization. From Lewandosky's view, this was used as a tool for restraining subjectivity. In other words, the ideal form of the square, which is indispensable to the Bauhaus's aesthetics and concept development, potentially has a more sinister side, one based exerting power to bring about obedience.

"The square becomes an absolute index for the world's order and measurement. As such, strict forms signify an aesthetic of obedience which does not allow spontaneity, emotion, deconstruction or disorder. There is just one code that follows a very clear rule. If this command becomes an ideology, it can instantly be used for totalitarianism and an ideological system. Also, unlimited trust in Bauhaus forms is consistent with military and religious organizations. All standardization and unitization appear to abandon individuality due to the principles of conformity. An individual becomes a slave to form and freedom of action is restricted."

The Bauhaus deliberately excluded anything associated with nature. Lewandowsky’s belief that danger follows any reduction of nature to strict forms is consistent with the opinion of the Bauhaus professor and architect Ludwig Hilberseimer, who criticized the city where nature is removed and trees and grass have disappeared. He described the city of a barren landscape, where nature has been replaced by asphalt and cement, as "more of a necropolis than a metropolis".

"The absolute reduction the Bauhaus's formal language aims for follows the principles of an aseptic-state-like purity, standardized viewpoint, and strictness. Here, emotions are consciously embodied according to the principles of aesthetics."

The artist reverses roles by using aesthetic language to reveal emotions. Throughout history and the development of modern life, it has become apparent how dangerous it is when emotions are consciously or subconsciously controlled. Form can be elevated to the state of ideology; soldiers marching in rows are an easily recognizable image of obedience. Such images are reminiscent of Oskar Schlemmer's painted crowd images, geometric stage attire, and robotic performances. Schlemmer's work, which completely eliminated natural and organic bodies, links the mechanization of the human body, which eventually leads to the entire mechanization of the environment.

The Bauhaus has increasing importance and attention in Berlin, with cultural exhibitions and massive openings happening throughout the year. Through ruminating over the movement’s influence and significance, Lewandowsky’s exploration directly faces the dark side of the Bauhaus Movement, revealing a voice that contradicts the approach of the majority. The artist tracks the shadow behind the Bauhaus's light. Through his unique language, he brings up elements the Bauhaus ultimately excluded and breathes vitality into these like a piece of poetry. Rather than lingering in the realm of criticism, this creates a constructive moment. Therefore, this exhibition Geometry of Obedience focuses on energy and essence in life and breaking the principles of obedience through abstract geometry.

Returning to Lewandowsky's square which repeatedly deconstructs and recomposes through slow movements, is already liberated from this strictness. It rejects obedience by slowly but energetically creating gestures of freedom. This geometric shape forms angles and creates lines in the air to represent signs, and then stops to think. The abstract gestures this produces are abundant and unlimited. Lewandowsky says:

"The dynamics' coincidental yet accurately calculated speed, angles and still state lead viewers to experience vigor and substance. If one follows the slow mechanical expressive dance, it appears strict movements change into poetic ones.